Four futures for the healthcare system

That healthcare systems the world over are under continual pressure to adapt is not in question. With continual concerns that current arrangements are not sustainable, researchers and policy makers must somehow make plans, allocate resources, and try to refashion delivery systems as best they can.

Such decision-making is almost invariably compromised. Politics makes it hard for any form of consensus to emerge, because political consensus leads to political disadvantage for at least one of the parties. Vested interests, whether commercial or professional, also reduce the likelihood that comprehensive change will occur.

Underlying these disagreements of purpose is a disagreement about the future. Different actors all wish to will different outcomes into existence, and their disagreement means that no particular one will ever arise. The additional confounder that predicting the future is notoriously hard seems to not enter the discussion at all.

One way to minimize disagreement and to build consensus would seem to be to have all parties come to a consensus of what the future is going to be like. With a common recognition of the nature of the future that will befall us, or that we aspire to, it might becomes possible to work backwards and agree on what must happen today. 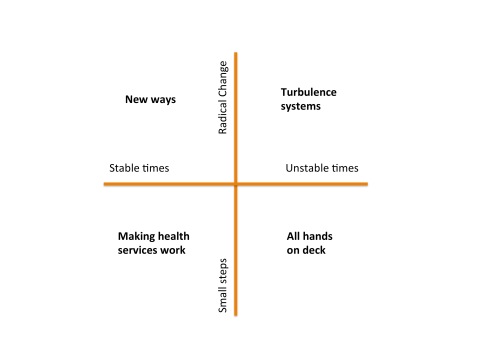 Making Health Services Work: In this quadrant, we are blessed with relatively stable conditions, and even though our capacity or will for change is modest, we can embark on incremental changes in response to projected future needs. We focus on gentle redesign of current health services, tweaking them as we need. The life of a heath services researcher is a comfortable one: no one needs or wants a revolution and there is time and resource enough to solve the problems of the day.

New Ways: Despite forgiving and stable times, in this quadrant we have an appetite for major change. Perhaps we see major changes ahead and recognize that incremental improvements will be insufficient to deal with them. Maybe we see future years with demographic challenges such as clinical workforce shortages and the increasing burden of disease associated with an ageing population. Consequently, more radical models of care are developed, evaluated and adopted. Rather than simply retro-fitting the way things are done, we radically reevaluate how things might be done, and envisage new ways of working, and conceive new ways to deliver services.

Turbulence systems: The risk of major shocks to the health system are ever present, including pandemics, weather events of ‘mass dimension’ associated with climate change, and human conflict. It is possible to make preparations for these unstable times. We might imagine that we set about to design some capacity for ‘turbulence’ management into our health services. Such turbulence systems would help us detect emerging shocks as early as possible, and would then reallocate resources as best we can when they arrive. The way that global responses to disease outbreaks has rapidly evolved over the last decade shows what is possible when our focus is on shock detection and response. Similar turbulence systems are evolving to respond to natural disasters and terrorism – so there are already models to learn from. In this quadrant then, we redesign the health system to be far more adaptive and flexible than it is today, recognizing that the future is not just going to be punctuated by rare external shocks, but that turbulence is the norm, and any system without shock absorbers will quickly shatter.

All hands on deck: In this scenario, health services receive major shocks in the near future, and well ahead of our ability to plan for these events. For example a series of major weather events or a new global pandemic could all stretch today’s health system beyond its capability to respond. Another route to this scenario in the long term is to not prepare for events like global warming or infectious disease outbreaks or an ageing population, and because of disagreement, underinvestment or poor planning, we do nothing. If such circumstances arrive, then the best thing that everyone in the health system can do is to abandon working on the long term, and apply our skills wherever they are most needed. In such crisis times, researchers will find themselves at the front lines, with a profound understanding and new respect for what implementation and translation really mean.

Which of these four worlds will we live in? It is likely that we have had the great good fortune over the last few decades of living in stable and reactively unambitious times, tinkering with a system that we have not had the appetite to change much. It seems likely that instability will increasingly become the norm however. I don’t think we will have the luxury of idly imagining some perfect but different future, debating its merits, and then starting to march toward it. There will be too much turbulence about to ever allow us the luxury of knowing exactly what the right system configuration will be. If we are very lucky, and very clever, we will increasingly redesign health services to be turbulence systems. Even if the flight to the future is a bumpy one, the stabilizers we create will help us keep the system doing what it is meant to do. ‘All hands on deck’ is the joker in the pack. I personally look forward to not ever having to work in this quadrant.

[These ideas were first published in a paper my team prepared back in 2007, and since it first appeared, the turbulence has slowly become more frequent …]

You are currently browsing the health system category at The Guide to Health Informatics 3rd Edition.